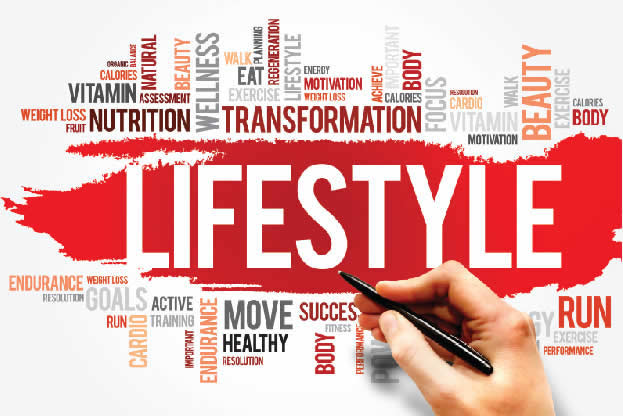 Is your lifestyle killing you?

Of all the various dictionary meanings of lifestyle, the most appropriate and comprehensive oneseems to be “the habits, attitudes, tastes, moral standards, economic level, etc that togetherconstitute the mode of living of an individual or group”. Very simply put, it is “the way in which a person lives”. Ideally, one’s lifestyle should be conducive to optimal productivity and happiness. But in today’s world, perhaps unknowingly, the objective of productivity (of the material kind) has completely clouded the other one, that of happiness. In the process, good mental and physical health has become the casualty. In the quest for metamorphosis from austerity to affluence, the collateral damage has come in the form of a deadly conglomerate of lifestyle related diseases that is little comprehended by people. An unbelievable dramatic shift can be seen in global statistics - overweight/obese people in the world today outnumber the hungry population – 2.1 billion is the estimated number of obese/overweight population in the world today. In fact, developing countries are in the throes of a twin crisis: hunger and obesity.

It is a fact that obesity is the mother of all lifestyle diseases and effective treatment of obesity literally cures most lifestyle disorders. So how does obesity beget so many lifestyle diseases? For this, we need to go back in time a little to understand how the human body behaves. When human beings were nomadic, or when food was scarce, it was seen that people who were bulkier and had more fat, could survive better as they had more “reserves”. This gradually changed the genetic pool to one that started preserving fat cells in the body to offer a survival advantage to the entire race/population, foreseeing adversity in the future, the so called “thrifty gene hypothesis”. Over time however, food became abundant, but the genotype persisted, accumulating fat that was not needed. This then is the genesis of the obesity epidemic. Unfortunately, the accumulated fat is not an innocuous onlooker. It is an active, dangerous and toxic entity that gives birth to insulin resistance, diabetes, heart disease, hypertension, cancer – the deadly conglomerate of lifestyle diseases alluded to.

Excess fat in the body sets into motion a process called inflammation, much the same as an infectious bacteria or virus would do, only far worse, as it is chronic. At the same time, when fat is in excess, it starts to accumulate in vital organs such as the liver, muscle, pancreas, brain, nerves, heart, etc, interfering in the normal functioning of these organs.

Inflammation and fat accumulation in the liver and pancreas is one of the prime reasons for getting type 2 diabetes. Obesity creates a situation of insulin resistance leading to overproduction of insulin from the pancreas that ultimately gets exhausted, finally causing deficient secretion of insulin, a condition we know as diabetes. Ultimately, diabetes itself has several complications that affect the heart, kidneys, eyes, nerves and brain. The appearance of all these diseases is unfortunately very stealthy, silent and diagnosed several years after obesity has set in. Therefore, people who are obese have to realise that these diseases come later in life and that prevention is the key. The “fat and fit” concept is a myth, since that is just a transitional phase that can well lead to all these diseases later on. Besides, long standing obesity is very harsh on the knees and ankles. The excess weight causes faster wear and tear of the joints leading to early osteoarthritis of knees and ankles.

Inflammation, insulin resistance, overproduction of insulin (a hormone that promotes growth) are all mechanisms that make different body cells multiply exponentially, literally unchecked. This is the genesis of cancer. When body cells of any part start multiplying in an uncontrolled fashion,autonomously, what results is cancer. Again, it is now easy to understand how obesity is a major risk factor for cancer as well. Therefore, many cancers are also because of poor lifestyle.

It is well known that people who are obese are far more likely to suffer from depression and even Alzheimer’s disease. Obese individuals can suffer from low self esteem and adverse body image issues. Suicide rates are higher in this population.

Poor eating habits, sedentary lifestyle, stress are the environmental factors that pull the trigger of the gun that is already loaded with bad genes. We have no control over the loaded gun, but pulling the trigger is a voluntary act that we can certainly avoid, by improving food habits, getting more active, working on stress levels thereby losing weight and reversing the entire cascade described above.

Since lifestyle diseases are silent, one needs to look out for them actively. Screening for diabetes, hypertension, cancer, etc on an annual basis is important. If detected early, a cure is possible in many cases. In the meantime, a healthy lifestyle, attaining a healthy weight, maintenance of that weight on a long term basis should be the goal. This is much like upstream swimming when trapped in a ravine, but swim you must. One simply cannot stop trying.

The methods adopted for attaining a healthy weight, treating diabetes and other lifestyle disorders, should be well validated, researched and scientific. Quick fixes, unsupervised diets, miracle mantras can all turn out to be counter-productive. After all, remember that it is your life at stake. Experimental, anecdotal remedies are best left alone.

Physical and mental health is a way of life. It is not a temporary treatment that has an endpoint. A good and healthy lifestyle, free of disease, should be the new, “normal” lifestyle.